In the past few weeks, I have had the pleasure of delivering the Leading High Performance Teams Masterclass. These events were coordinated by the great team at Aventedge who worked closely with me to plan the two-day events in four Australian capitals.

With more than 70 delegates representing 37 different industries and organisations, there was a very diverse group of people and experiences. From not-for-profit to major multinationals, railway companies to medical and aged care services, lawyers to salespeople and CEOs to fire safety engineers – they were all there.

Those attending did, however, share some things in common:

They also recognised that, whatever business you are in, it is vital to know how our beliefs and emotions have a major impact on our interactions with each other.

There were many examples discussed within the differing groups around four of Australia’s state capitals. Several of these examples considered the ‘toxic’ workplace. This sort of toxicity is always brought about by one or more individuals behaving inappropriately. Such behaviour can range from being verbally aggressive – the use of offensive language – to threats to job security, such as a manager threatening a team member with the loss of their job.

The Masterclasses looked at how our beliefs, emotions and behaviour have a major impact on the way we interact in the workplace, and how unwelcome behaviours can be understood and dealt with as well as how positive behaviours can be used to gain and promote trust and engagement. 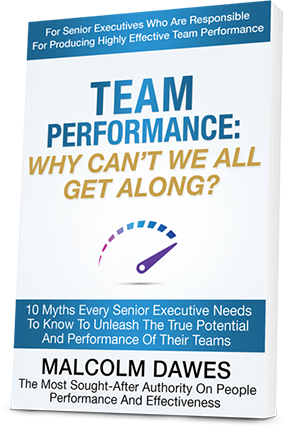 Of course, looking at emotions and behaviours also has a wealth of application in less toxic environments. We addressed the elements of motivation, performance improvement, interaction effectiveness with communication and a wide range of associated skills.

The Masterclasses move to New Zealand in August with Wellington on 5th & 6th and a sold-out event in Auckland on 7th & 8th. New dates have been added for Auckland on 28th & 29th with a few tickets left at present.

No matter what business or organisation you work in, having a good understanding of why people behave the way they do helps immensely in creating a high performance team.

The Leading High Performance Teams Masterclasses are led by Malcolm Dawes, The Most Sought After Authority on People Performance and Effectiveness. Get a copy of Malcolm’s book Team Performance: Why Can’t We All Get Along? at www.dtaworldwide.com or call +61 1300 561 369 or +44 (0)203 026 2981